I have two lovely daughters, Emily who is nearly 21, and Sophie who is 10 but thinks she’s 21. They’re blessed with a loving mother… and me as a dad. I’m a demanding man when it comes to a few things;  independence and toughness. A lot of things cost money, but being tough is free. One of the ways one can become tough is being miserable, I know crazy right? From being miserable you become tough, from becoming tough you become independent. And when you become independent you become free. Free to enjoy all that life has to offer without relying on some dude to be your knight in crappy armor, armor is for wimps anyway.

I know  when I say, “figure it out!”  that they think I hate them, in all honesty that couldn’t be further from the truth. It’s because I love them and I don’t want their default setting to be ask a man. I want them to… figure it out. Those that know me know that I enjoy a good back country adventure so I’m going to tell you a few that my daughters have enjoyed with me. By enjoy I mean hated.

Emily and the Canoe Anyone that has spent anytime on moving water knows that the person in the bow of the canoe is the lookout. You’re looking for rocks, logs, and anything in general that could upset you’re glorious day. The key is to give the alarm before the canoe is high centered on the rock. Unless you’re Emily. On a bright July day Emily and I took to the river with fly rods and plans for trout. Within 30 seconds of paddling,  a rock slid under the center of the bottom of the canoe Emily said, “rock.” Too late, over we went. We lost the bug spray, my beer, and my mind. I blasted out a blue streak of swears that you can still hear echoing through the river valley.  I called Emily, a “liability” as we stood knee deep in the river holding onto what we could grab. Now here is the decision point, pack up and go home, or fish. The easy route pack up and go home. My route, we’re fishing damn it. Although she was upset by my reaction to her canoe capabilities she soldiered on, we had a great day, she learned canoeing and flyfishing. And I was reminded that you can catch fish without beer.

Sophie and the Missing Outhouse Since the two older kids have moved out Sophie has become my only on hand outdoors adventurer, and often misadventure partner. We decided to try a new trail near our camp that would include hiking, fishing, and hiking some more. When I say we, I mean me. I drug an unwilling Sophie along. Off we went early in the morning. Sophie is an accomplished hiker, she has reached the summit of Katahdin twice, and she’s only 10.

But on this day she wasn’t too into it. Perhaps it’s because it was early June and the bugs were bad. Perhaps it was because it was windy and cold, or perhaps it was because the trail was boring. It didn’t matter we would push on. There was yelling, there was begging, there was pleading, but I did not give in. As we reached our first destination,  the pond where we planned to fish, Sophie said, “I have to go to the bathroom, the number 2 kind.” Great! But wait up ahead at one of the primitive campsites was a sign. Written in big block letters was the word. “OUTHOUSE!” Praise Jesus! We scurried up the outhouse trail for a long time, nearly a quarter mile. We could see where other weary hikers hit by the effects of their breakfast of greasy bacon had let down their guard and had to do an emergency blow. Was this some sort of sick joke. Then we saw it. In the middle of a mosquito infested forest. A box with a seat on it. There was no house in this outhouse. I won’t give you the details but the visit to the latrine involved me providing the cover of a constant bug spray cloud while my daughter did her business, I used nearly a whole can of Deep Woods Off, oh what fun we were having.

We did manage some good trout, got some great views, and I’m pretty sure she can poop in any public place, a common phobia for most people. Mission accomplished.

My stories often come off as funny, but in reality the stories and memories that I’ve made with my girls are that of pride. Because in every adventure, or misadventure they learn to be independent, to persevere, to figure it out, and in the process they have become and are becoming strong independent women, ready to meet the challenges of life. I couldn’t be more proud. 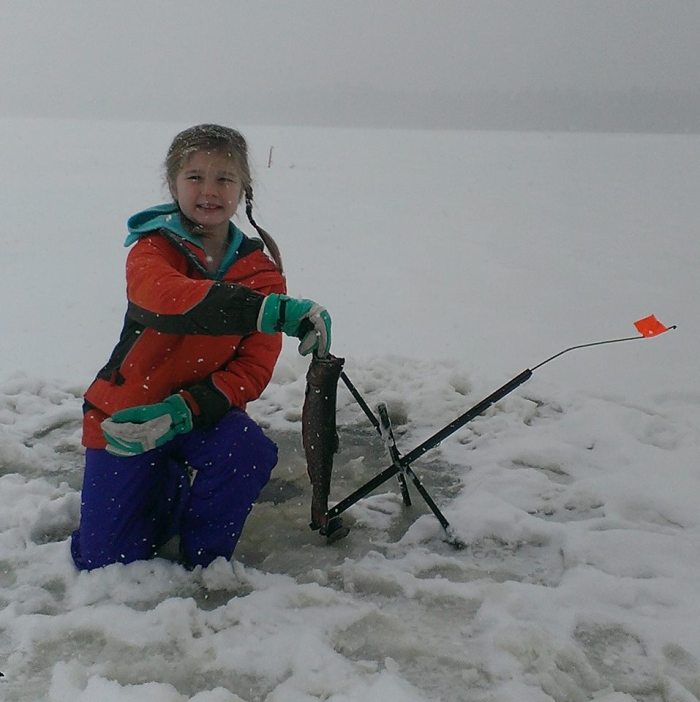 View all posts by Jim Neville